Dr. Adam L. Young: Cryptovirology and the Birth of Ransomware 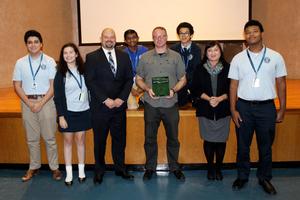 On October 24th, as Dr. Adam L. Young provided a guest lecture titled Cryptovirology and the Birth of Ransomware.

Students and alumni enjoyed a special presentation on October 24th, as Dr. Adam L. Young(pictured center) provided a guest lecture titled Cryptovirology and the Birth of Ransomware. This event was made possible thanks to the efforts of computer science teacher Ms. Edit Boral(pictured second from right) as well as growing interest in Molloy’s expanding computer science program.

Dr. Young initiated the area of study known as Cryptovirology in 1996 with Moti Yung at Columbia University. Cryptovirology is the study of the applications of cryptography to malicious software. He is co-inventor of the secure data kidnapping attack known as Ransomware. He is also co-inventor of the discrete-log kleptogram, a backdoor Trojan horse attack. Dr. Young co-authored the book Malicious Cryptography with Moti Yung, which was published by Wiley in 2004. Dr. Young received a BS in Electrical Engineering from Yale University in 1994, an MS in Computer Science from Columbia University in 1996, and a PhD in Computer Science in 2002 awarded with Distinction by the Columbia University Graduate School of Arts and Sciences.

Dr. Young acknowledged that Ransomware is a threat to users of computer systems worldwide, but he and Moti Yung published their findings as a way to warn and prepare users about this inevitable danger of technology. “Cryptovirology is the proactive anticipation of attacks against computer systems and networks. We look at how to develop ways to protect people against these types of [Ransomware] attacks. That’s the justification for doing this type of research,” said Dr. Young.

Thank you again to Dr. Young, Ms. Boral, and all of the alumni and students who came out to support the lecture!