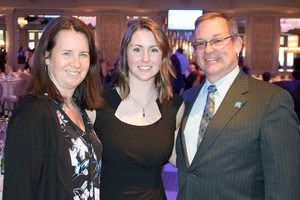 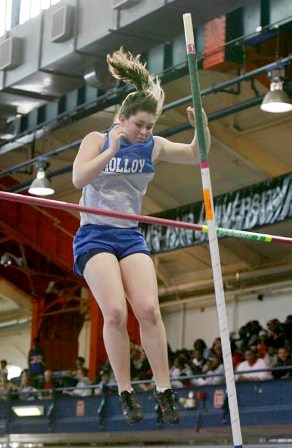 The Stanner Alumni Center, coaches, faculty and staff of Molloy congratulate Rebecca Power-Hassard ’08, who was inducted into the prestigious GCHSAA Hall of Fame on April 19, 2018. Rebecca joins fellow alumnae Angelina Waterman-Reinecker ’07, Rosalyn Gold-Onwude ’05, and Jessica McEntee ’05 in the GCHSAA Hall of Fame.

Rebecca was a talented two-sport athlete at Molloy, competing in Volleyball and Track and Field. In 2007, as co-captain for Molloy’s Volleyball team, she was voted First Team All Queens. In Track and Field, Rebecca held the CHSAA League record for the Indoor and Outdoor Pole Vault. She was a five time National Championship Qualifier in Pole Vault and an 11 time NY State Qualifier in Shot Put and Pole Vault. Rebecca won 13 Brooklyn/Queens CHSAA Individual Championships and 11 CHSAA Intersectional Individual Titles. In 2007 and 2008, she was selected for the Daily News First Team All City for Track & Field. In 2008, she was voted Outstanding Field Athlete at the Indoor CHSAA Championships. She was not only an elite performer, she was a respected leader, serving as Molloy’s field team captain. (Pictured right: Rebecca Power-Hassard ’08 center with parents Pam Power & AJ Power ’84)

After graduating from Molloy, Rebecca continued her athletic career at SUNY Albany, where she received a BA in Sociology. She continued her dominance in the America East Conference Championships in Pole Vault, Shot Put and Javelin. Her class records in Pole Vault and Javelin still stand at Albany. After college, Rebecca combined her love of athletics with her love of helping others, as she currently works with young adults with physical and developmental challenges. To further assist young adults with challenges, Rebecca started her own company, Fitness with Becca, which provides personal athletic training for this community. Her love of sports also helped spark her friendship and eventual marriage to Stephen Hassard, a teammate at Albany. The happy couple welcomed their daughter, Aayla, into the world in January 2018. Rebecca is the daughter of Molloy teacher and coach Mr. AJ Power ’84 and the sister of Mary Grace Power ’16.