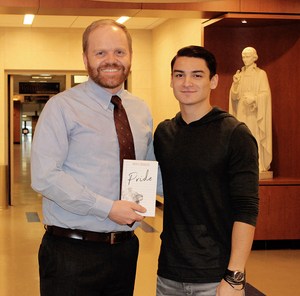 Sometimes the path we take toward success and self-satisfaction is not always clear. In the case of Kosta Rosvoglou ’13, the young Stanner alum cherishes his own coming of age story. The Fordham grad, with degrees in Marketing and English, acknowledges that he went through a period of time when he lost sight of the future. Despite this uncertainty, what remained clear was his love of writing, which was once nurtured at Molloy by teachers like Mr. Vellucci and Mr. Kilkelly. “I always liked to write. In my last year of college, after losing sight of things for a while, I picked up a pen and a piece of paper and started writing. As I wrote about events in my own life, ideas flowed for the next six or seven months, and they eventually translated into a fictional story. I found my way through writing,” says Kosta. (Pictured right w/Mr. Cameron)

The result of Kosta’s writing revelation is Pride, a coming of age story about main protagonist Jason Young. Jason is a high school basketball player with great expectations placed on him by his family and friends. He is very ambitious and faces pressure in most aspects of his life. Suddenly, an unforeseen tragedy changes Jason’s life forever. He is ultimately forced to take a step back, evaluate his life, leave his comfort zone, and rediscover the things that matter most. The book essentially asks: “How do you deal with what life throws at you?”

“I used to play basketball in high school. It was a big part of my life,” says Kosta, who notes that many details from the book draw from his own experiences – even some from Molloy. “High school kids will identify with this story. If they feel overwhelmed, or are still figuring things out at a young age, this story reminds them that you can lose sight of things at any time, but although things might not go as you planned, sometimes the strongest and most successful people make a name for themselves after things don’t go the right way.”

Kosta’s hope for Pride is for it to land in the hands of high school teens across America. “I really think teens could find a positive message in this book. A kid somewhere who is lost may pick it up and be inspired by learning that while things can get bad, good can come from that.” Kosta hopes that the book will eventually be picked up by a big publisher, but until then he is enjoying working at Universal McCann, a global media and advertising agency that represents major brands like Chrysler, Coca-Cola, Hershey’s, and more. He also has ideas for a Pride sequel as well, but that is a story for another day.

Pride is currently available in paperback and on Kindle on Amazon.com