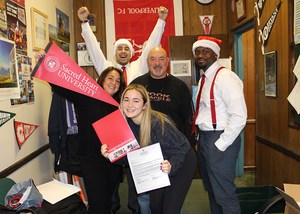 Last month, senior Siena Pizzo ’18received an unexpected surprise during a routine school day. Siena was called into the office of her college guidance counselor, Mr. Esgro, for what she thought would be a typical meeting. When she entered, however, she was greeted by her parents as well as two college representatives wearing Santa hats. They handed Siena important documents, which she then read aloud. She stopped several words in as she got a bit emotional. Siena had just received a surprise in-person acceptance from Sacred Heart University! The university had sent a welcome wagon to Molloy and other high schools to brighten the spirits of prospective students just before Christmas. Sacred Heart had been Siena’s top choice, and she now knows for certain she will attend the school to study nursing next fall. The surprise visit was filmed and included in a video package produced by Sacred Heart, which you can watch via the following link. Siena’s acceptance appears at 21 seconds. | You’re Officially A Pioneer!