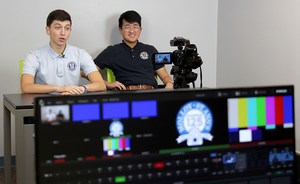 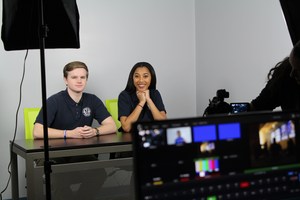 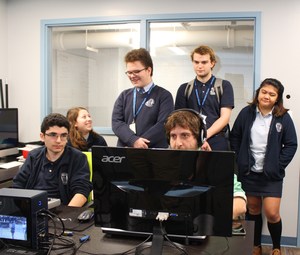 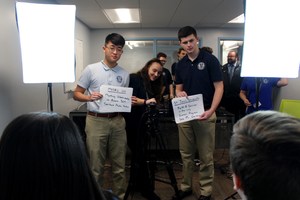 In October, we unveiled Molloy’s brand new Video Broadcast Studio. The space was added to our sub-floor thanks in large part to the fundraising results of the 2016 Walkathon. The studio is outfitted with professional work stations, camera, audio, and lighting equipment, and editing and streaming software. These additions give Molloy’s budding Video Broadcast Club a dedicated home to work and create. They also help place a greater emphasis on video production projects that enrich student life.

On Friday, January 12th, the Video Broadcast Club successfully live-streamed their inaugural “AMHS Live” program. The first of its kind in Molloy history, the program featured anchors Vincent Cataldo ’18 and Jiho Chang ’18 as they read the morning announcements during homeroom. The entire segment lasted a little over a minute, but it was nonetheless a historic moment for Molloy. It represents another step toward our school’s goal of implementing new technology and offering our students the most modern and invigorating education possible. The club broadcast the morning announcements once again the following Friday on January 19th, this time with anchors John Zeihl ’18 and Anesia Whitfield ’18. After the buzz created by the program last week, there were noticeably more crew members behind the scenes for the second broadcast. As the club continues to produce content and grow in membership, we expect to share some of their projects with our alumni community. For now, the club will continue to get comfortable in their new surroundings and continue to make Molloy history.