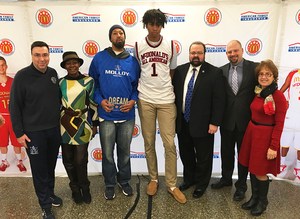 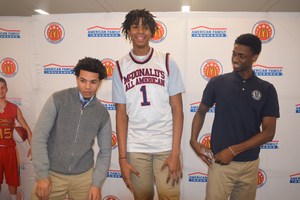 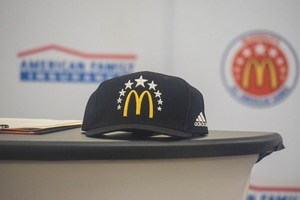 Representatives from the McDonald’s All-American Games hosted a ceremony at Molloy on Thursday, February 1st, in honor of 7’2” center Moses Brown ’18.

Representatives from the McDonald’s All-American Games hosted a ceremony at Molloy on Thursday, February 1st, in honor of 7’2” center Moses Brown ’18. The nationally ranked five-star recruit, who recently made headlines when he committed to play ball at UCLA in the fall, received his All-American Games jersey during the ceremony. Moses is Molloy’s first All-American jersey recipient in basketball since former NBA All-Star Kenny Anderson ’89 made the roster in his senior year. Moses’ father Malcolm, aunt Josephine Ross, teammates, and classmates were in attendance to offer their support. Malcolm was also honored by American Family Insurance, a sponsor of the AAG, with the AFI Dreams Champion award for supporting Moses as he continues to live his dream.

Coach Mike McCleary shared a few words at the podium acknowledging how difficult it is to earn a spot on the All-American Games roster. “This is no small feat. Although Moses first came in [to Molloy] and wasn’t highly sought after, it turns out he grew a lot, and he was such a determined worker that he became a great player. He went from someone who wasn’t thought of, to one of the top 24 players in the country.” McCleary continued. “That doesn’t just come with being 7 feet tall. It comes with persistence and the determination to make sure you’re going to do the work necessary to become a great player. That’s what Moses has done.”

Moses also approached the podium to address his supporters. “I would first like to thank God, because I wouldn’t be in the position I am today without Him. I would like to thank the McDonald’s committee for recognizing my accomplishments so far. And without my friends, family, and teachers, and coaches, it wouldn’t have been the same these past four years. It’s been an amazing opportunity to play for Archbishop Molloy, and I just want to thank everyone that’s helped me and that has been a part of my life so far. Thank you.” (Pictured right: Cole Anthony ’19, Moses Brown ’18, and Khalid Moore ’18)