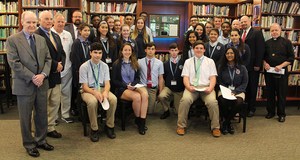 Earlier this year, Molloy recognized the 50th anniversary of the passing of PFC Louis Willett ’63. On February 15, 1967, Private First Class Louis Willett was killed in action during a gun battle in Vietnam. There is more to the story, however, as PFC Willett’s fatal wounds came only after his actions on the battlefield allowed his platoon to safely withdraw from their once compromised position. PFC Willett’s bravery saved many lives that day, and his sacrifice was ultimately posthumously rewarded with the military’s highest respect: the Medal of Honor. He is the only Stanner to hold this distinction.

PFC Willett’s legacy has continued in the hearts of many, including his family, those he served with, his classmates, and with the students at Molloy. That’s because many from the Class of 1963, and one dedicated social studies teacher, have made it a point to celebrate PFC Willett’s bravery and teach our students the importance of his place in history. Each year, in recognition of Memorial Day, Mr. Jeff Gallagher ’88 instructs his students to leave their classroom and head down to Molloy’s Stanner Hall of Fame. There, Mr. Gallagher reads PFC Willett’s official Medal of Honor citation next to his Hall of Fame sketch. This year, members of the Class of 1963 joined Mr. Gallagher’s class for the reading in their continued observation of the 50th anniversary of their classmate’s passing. Retired US Navy Capt. Larry Seible ’63, Bob Corrigan ’63, and Jim Corcoran ’63 represented their class, while Capt. Seible opened the brief ceremony with a few words of inspiration. He expressed his deep admiration for PFC Willett, and urged each student to read the Medal of Honor citation more carefully, and even share it with their families. Capt. Seible then presented Mr. Gallagher with a beautiful copy of The History of the Medal of Honor for use in his class and in the school’s library. Later on, the Class of ’63 traveled to St. John’s Cemetery in Middle Village to pay their respects at PFC Willett’s burial site.

Also of note, the ceremony took place in the library this year rather than the Stanner Hall of Fame. This is because Molloy has installed a shadow box of military artifacts, previously donated by Capt. Seible, which represent PFC Willett’s career in the army. The shadow box resides among the bookshelves of the William J. Murphy Library, backlit in Molloy blue, and serves as a focal point for students and visitors to forever admire. The installation will help keep PFC Willett’s legacy as strong as ever here at Molloy, and we can’t thank the Class of 1963 enough for their continued efforts to remember this great American hero.