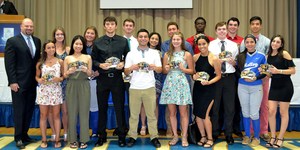 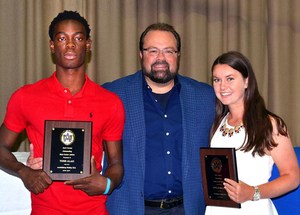 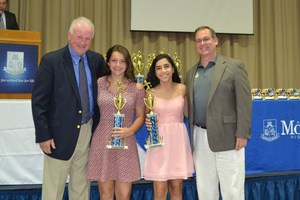 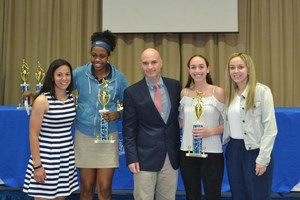 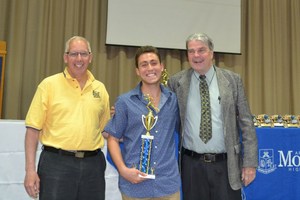 On May 23rd, Molloy’s coaching staff and faculty celebrated Athletic Awards Night with students and their families. This annual school event honors the hard work and outstanding achievements of Molloy’s many talented student-athletes. Coach’s Awards and MVP Awards were presented to the top athletes on each team, while Scholar Athletes were awarded for their balanced performance in the classroom and on the field of play. Click the button below for a full list of this year’s winners. Playoff results for our championship teams are also included.
The Jack Curran Award Outstanding Senior Athlete Award is presented annually to the overall best male and female athletes in the graduating class. This year’s recipients are Oluwatomide Alaoand Sinead Brady. Oluwatomide, known to many of his classmates as Tomi, was team captain of the varsity Track & Field team. He owns two Molloy records and is a CHSAA record holder. He is a six-time meet champion holding records in three events. He is a three-time sectional and city champion holding a meet record and MVP. He is a four-time state champion and holds a meet record and MVP. Tomi is the reigning New York State champion and CHSAA record holder in the 55 meter high hurdles. He is also a two-time All-American with the Shuttle Hurdle Relay Team. He will attend the University of Connecticut this fall. Sinead is a two-sport athlete. She has competed and started on one of those varsity teams for four years. She was captain of both of her teams as a junior and a senior. She was named to the All-League Team two times in her career. She holds the school record for most career goals and ranks 6th in the Long Island Private Schools for goals in a season. She will attend Fordham University this fall.
Published August 16, 2017