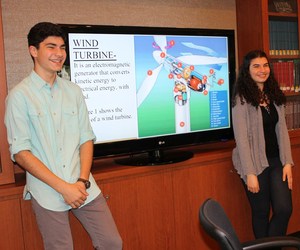 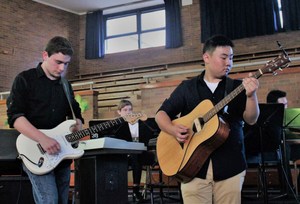 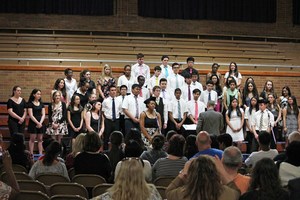 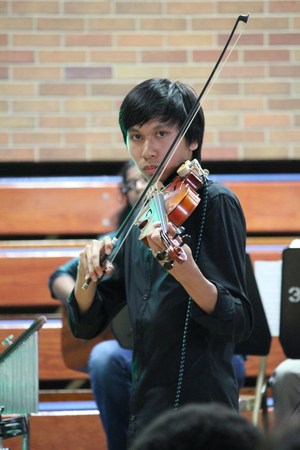 On May 16th and May 17th, Stanner families were treated to two nights of scientific research and artistic showmanship as Molloy’s scientists, choruses, bands, and artists came together to host “An Evening of Music, Art & Science“. On night one, the festivities kicked off with a Science Symposium. Students presented their research projects and explained their work to their inquisitive peers. In addition, the Symposium was scheduled later than in previous years in order to allow for parents and alumni to attend. “The Symposium benefited from the changing the start time and combining it with what used to be the Music and Art Festival,” said program director Ms. Mary Mallia. “We were very pleased with the turnout. In general the Symposium is a great way to gain more exposure for Molloy’s Science Research Program.”

After the Symposium wrapped up, the musical portion of the evening began with the freshman/sophomore chorus. Led by director Ms. Ya-Ting Yang, the chorus performed a variety of pieces ranging from Mozart (Friends, forget the cares), to American Folk Music (Shenandoah), to Broadway (Babe in Arms, Westside Story). The second half of the program featured Molloy’s Concert Band, which performed Tchaikovsky (1812 Overture), Leonard Bernstein (One Hand, One Heart), and themes from Pirates of the Caribbean among other selections. On night two, the Guitar & String Ensemble opened up the show with a diverse setlist featuring Led Zeppelin (Immigrant Song), the Beatles (While My Guitar Gently Weeps), Heart (Barracuda), and other classic and contemporary rock songs. The second portion of the program put the spotlight on the junior/senior chorus, directed by Mr. Jim Sheehan ’75. The chorus performed selections from Westside Story, Ragtime the Musical, and more. Both evenings also featured a collection of student artwork, including paper and canvas paintings as well as 3D computer-generated art.

“Our music and arts programs are growing, so reformatting what was our Music and Arts Festival into this year’s event, which also included science, was beneficial to our students,” said Assistant Principal Ms. MaryAnn Safrey. “Splitting the even into two nights allowed the students and program directors to expand their repertoires and perform a wider variety of songs. The music was diverse, and the directors rearranged some pieces to make them more unique to our concerts. The students definitely took on some difficult music, but I feel these were our best school concerts ever.” Molloy invites all alumni and parents to future showcases of science, music, and art at the school, and encourage all to keep reading The Beehive or visiting www.molloyhs.org for announcements about event and concert dates.