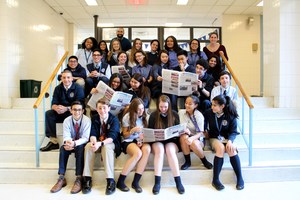 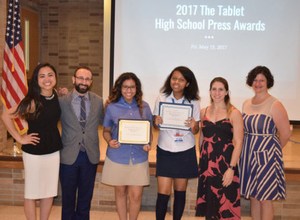 “Ms. Sawyer and I first started moderating The Stanner in fall 2015, but it took some time to get acclimated,” said Mr. Sommo. “We finished second at the Press Awards in 2016, and then we got off to a late start this year because the majority of previous staff had graduated last June. We ended up recruiting a completely new crew, but we were fortunate to discover some truly talented reporters and designers right from the beginning.” Students covered a wide variety of topics throughout the year, from school news and events, to senior and faculty profiles, to horoscopes and politics. The Stanner also benefited visually from more student-generated photography and even comic strips. “Ms. Sawyer and I were very impressed with the content the students created this year, and to have that validated at The Tablet’s awards ceremony was very special. We’re all motivated to improve even more next year.” Check out the video below, which captured moments from the Press Awards and features interviews with The Stanner’s own Sarah Rodriguez and Sydney Bryant. One word stood out after we watched this clip: poised!