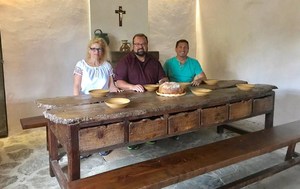 In July 2017, thirteen pilgrims from Marist schools in New York and Chicago represented the US Province during a sojourn to Notre Dame de L’Hermitage in LaValla, France. The group from Chicago included Br. Hank Hammer, Larry Tucker, Patti Arvesen, Erin Kelly, Sarah Rakouskas, and Deacon Andy Neu. Traveling from New York were Br. Al Rivera, Br. John Kachinsky, Maureen and Pat Hagan, and Molloy’s President Richard Karsten ‘81, Dorothy DeNoto, and John Kramer.
Each day of the pilgrimage included time for personal and group reflection, as well as visiting historic sites. The first day featured a tour of L’Hermitage, including the chapel and reliquary, St. Marcellin Champagnat’s bedroom, and the original steps the early Brothers used. The group also hiked up the hills of LaValla, prayed at Champagnat’s table, and returned to L’Hermitage, literally walking in Marcellin’s footsteps.
The pilgrims then visited LaRosey, where Marcellin was born, and Marhles, where he received his sacraments. They also made a stop at the site of the Montagne moment, where the ill boy first inspired Marcellin to found an order of brothers, and the place of the Donnet family, where the miracle of the Memorare in the Snow took place. The pilgrims also spent time in LePuy, where Marcellin’s Aunt Louise was a member of the congregation of the Sisters of St. Joseph. It was also in the cathedral in LePuy that the idea of the Society of Mary first came to Jean-Claude Courveille. The pilgrims finished up their journey with a tour of historic sites in Paris.
Published August 16, 2017 Print