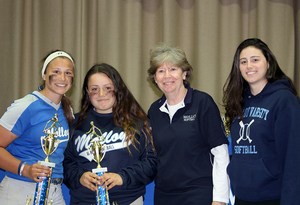 Molloy’s varsity softball coach, Maureen Rosenbaum, and several of her players were recently recognized for their outstanding 2017 season. The New York State Sportswriters and Coaches Organizations for Girls Sports (NYSSCOGS) announced their All-State Softball Team in late June. Among the many outstanding players to make the cut is Kelsey Carr ‘20, a freshman who pitched and hit her way onto 2nd Team All-State. In her very first year at Molloy, and also her first year on varsity, Kelsey did more than hold her own; she emerged as a leader and top contributor on both sides of the ball. Look no further than her performance in the city championship game: 17 strikeouts and 3 RBI in a 4-0 win over Moore Catholic. If you do look further, however, you’ll discover her eye-popping overall pitching and hitting stats from this past season: 15-4 record, 236 strikeouts, .478 AVG, and 33 RBI. She was also named the team’s MVP. She worked well with catcher Jessica Hickey ’17, the team’s co-captain who has since signed to play softball at Queens College this fall. (Pictured L-R on Athletics Award Night: Kelsey Carr ’20, Jessica Hickey ’17, and coaches Maureen Rosenbaum and Catie Massowd ’07. Photo by Isabella Fazio ’19.)

Several of Kelsey’s teammates were also honored as All-Stars by local news publications The Tablet and the Times Ledger. Congratulations to Coach Rosenbaum, our All-State and All-Star student-athletes, and to the entire coaching staff and varsity team on their championship season!