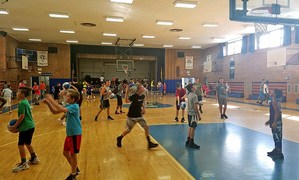 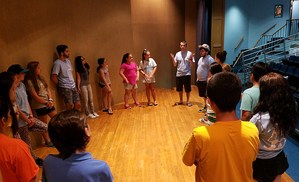 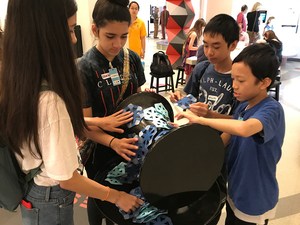 There's plenty to do at Molloy during the summer for elementary age students looking to learn something new.
In addition to several renovation projects, Molloy was buzzing with activity elsewhere this summer too. First, Molloy again hosted its annual Memorial 5 Camps, formerly known as the Jack Curran Camps. The baseball camp offers an “Elite Week” for the serious player who wants to focus on intense training in the major skills of baseball. All players get a video analysis of their swing and throwing motion. The basketball camp serves many age groups and skill levels and provides an inclusive, safe environment where players can develop and have fun while competing in games and contests. For more information visit http://memorial5.com/

In addition, two new camps were introduced earlier this July. STEM Summer Camp offers innovative, fun, hands-on learning opportunities in computer science, engineering, technology, and math. During camp, students have been developing a soundboard app for android devices, designing and printing 3D artifacts, learning about circuits, and turning everyday objects into musical instruments with a MakeyMakey console. Campers also took a trip to the National Museum of Mathematics (pictured) as part of the week’s activities.

In addition, Molloy is also hosting Theater Camp, which is a week-long workshop which focuses on acting technique, story-telling, acting and improvisational activities, and monologue/scene work. Campers explore their creative side in a safe and encouraging environment led by current Molloy students as well as recent Molloy alumni. On July 19th, campers enjoyed a field trip to Pearl Studios (pictured below right) as part of the Camp Broadway program. A professional Broadway actress spent time with our campers and demonstrated her own acting techniques. She then took questions during an informative Q&A session.

The initial success of the STEM and Theater camps is wonderful to see, and we hope to build on that success next summer. If you have any questions about future summer camps please call 718.441.2100. Thank you to Mr. Mike McCleary, our coaching staff, Ms. Edit Boral, and Ms. Shannon Winters ’06 for their work on these outstanding camps.