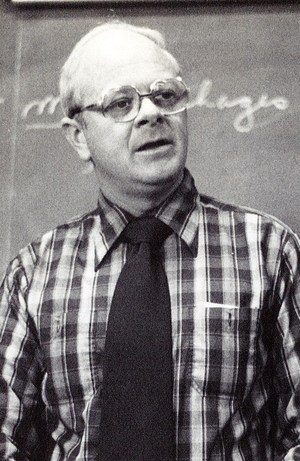 Congratulations to Br. Patrick Hogan, who officially retired this June after over 55 years of service to the Molloy community.
Congratulations to Br. Patrick Hogan, who officially retired this June after over 55 years of service to the Molloy community. After pronouncing his first Marist Vows at Tyngsboro, MA in 1958, Br. Pat began his teaching career at Resurrection Ascension School in 1961. He then embarked on his storied tenure at Molloy in the fall of 1962. In the classroom, Br. Pat has been known as a passionate and caring science and religion teacher. In sports, Br. Pat coached with dedication for many years, including during the “golden era” of Molloy Track & Field in the 1960’s, which saw many city championships line the school’s trophy cases. Br. Pat has also served as a guidance counselor, Alumni Director, and later as Alumni Spiritual Director. He has indeed worn many hats during his career.
One of Br. Pat’s truest passions is service. He has devoted so much of his time and energy to people in need. At the Mid-Hudson Valley Camps in Esopus, Br. Pat has volunteered at countless camps serving deaf and needy children and adults. He has also been a fixture at Molloy camp experiences at Esopus, contributing to the memorable, family atmosphere that so many look back on fondly. Br. Pat’s service has also impacted people abroad. In 2004, he and Mr. Chris Dougherty ’91 established the St. Marcellin Champagnat Society (SMCS), an international service society that provides opportunities for students to serve the needy, sick, and disabled in Lourdes, France and in other situations throughout the US and the world. Br. Pat has accompanied students on many trips to Lourdes, and the society has since gone on to help people in Nicaragua, Jamaica, Costa Rica, and other locations.
Br. Pat’s resumé also includes Marist Vocation Director (1980-1985), founding member of Our Lady of Mercy School Board (2008-2012), and member of “Notre Dame De Lourdes Hospitalite” (Lourdes, France, 2009). In addition, 2017 marks Br. Pat’s 60th anniversary as a Marist Brother. He will be honored along with other Brothers at a Jubilee Mass at Marist College on June 17th.
In 2015, a scholarship in Br. Pat’s name was established by former student and longtime friends Mr. Steve and Linda Matteini. In honor of Br. Pat’s retirement and 60th anniversary as a Marist Brother, consider making a donation to The Brother Patrick Hogan Fund. Br. Pat, thank you for all you have done for thousands of Stanners, campers, and families. Alumni can send their congratulatory messages for Br. Pat to [email protected].
Published June 22, 2017