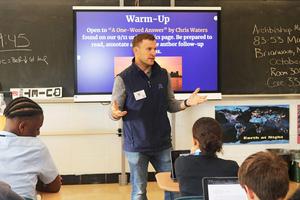 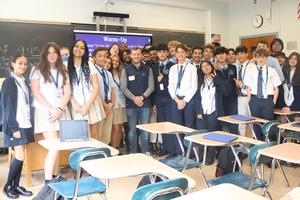 Back in September, Molloy shared a video produced by TSA which featured Chris Waters '05, a Senior Federal Air Marshal. In the video, Chris reflects on the 21st anniversary of September 11, 2001 and being at Molloy while the event unfolded. Chris also remembers his late father, fellow Stanner Capt. Patrick Waters’ 74, FDNY, who tragically lost his life while attempting to help others at the World Trade Center.

On October 13th, English teacher Ms. Amanda Vicari invited Chris to Molloy to share his story with her sophomore classes. The sophomores had been working on an assignment through which they were analyzing different witness accounts of 9/11. One of the accounts was by Chris Waters, who had written an essay for the book We Will Never Forget: The Stories of Children of 9/11 First Responders. Chris noted at the beginning of his presentation that the sophomores were all born in the late 2000s, meaning they had only learned about 9/11 through stories and various media. They had not witnessed it firsthand as Chris and other generations had.

Chris supplemented what the students read in his essay by sharing his memories and feelings as the events of 9/11 unfolded. He asked the sophomores to close their eyes as he walked them through his day – just his second day of freshman year at Molloy. He had not had the opportunity to make many friends yet, and he was already trying to adjust to a new environment. He recounted the initial first period announcement on the PA system from then Principal Br. Roy George. He recalled the confusion, the disbelief, and receiving the news that his father, Capt. Patrick Waters, was killed in the north tower. While this event was horrific and traumatizing, Chris explained that he eventually accepted his father's death because he made the brave choice to protect and serve despite being off-duty at the time. "He loved his job. He was an ordinary man who did things extraordinarily well. Did he hear the evacuation order? Did he ignore it? It doesn't matter, because people needed help, and he made a choice to go in without orders," explained Chris.

Chris also talked about the months and years that followed the events of September 11th. He and his family went through many stages of grief, and Chris saw his grades at school suffer as a result. He revealed that once he got to sophomore year, he benefited a great deal from Molloy's Peer Counseling program. He also made an effort to get more involved in after school activities. "The spirit of the school helped me," said Chris. He remains grateful for all the faculty, classmates, and counselors that supported him throughout his time of need. All the support he received from his family, friends, and his Molloy family eventually set him on a path to becoming a Federal Air Marshal. "I've made choices similar to my dad, to step in and help others," said Chris.

Special thanks to Chris Waters for visiting Molloy and providing our students with these valuable insights.