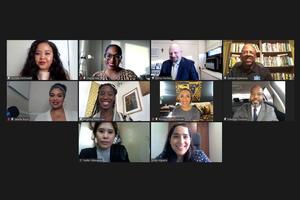 What does Black Excellence mean to you?

Entrepreneur and Chair of the Archbishop Molloy Council for Diversity & Inclusion, Tenisha McDonald hosted the inaugural Black Excellence Townhall virtual event at Archbishop Molloy High School in Briarwood, Queens NY on Monday, March 1st, 2021. The discussion of Black Excellence provided a space safe for panelists to explore questions of Black Identity and Professionalism—how they contributed to their successes and what they have had to overcome to be the person that they are today. A recording of the event is available at the bottom of this page.

“For me as a Black woman, Black excellence means making the most out of the resources in which I’m provided and shaping and stepping into the fullness of my own Black identity and celebrating it, while also navigating the obstacles that arise because of that celebration,” McDonald said as she kicked off the panel via Zoom.

McDonald is a 2007 Molloy graduate who earned her BA at Cornell, MA at Queens College, and is currently pursuing her PhD at Princeton University. She is the founder of Writer’s Ink NYC, LLC, a content writing and editing company based in New York City.

For Wiel, Molloy is a big reason why she is in her industry today. “Black Excellence means to me, being able to be your whole self at all times,” she said. “I’m a Queens girl at heart, so being able to walk into a meeting with the NBA and sit with C-Suite level people and still have my hoop earrings on and my baby hairs popping, that’s what Black Excellence means to me.”

Wiel, a 2004 Molloy alumna, is a sports marketing professional who has worked with powerhouses such as ESPN, the NBA Family, Samsung, and Coca Cola. She has earned her BA from Penn State and MA in Sports Management from Columbia University. She is the founder of Minorities in Sports Business Network, an organization that empowers minorities working in the sports industry, and has been featured in Forbes.

Panelists discussed the importance of representation in each of their fields. During a trip to New Guinea for a speaking engagement, Boyd recalled how empowering it felt to be surrounded by other Black professionals. “It’s the Day of Independence, and the stage is full of important people, delegates, some in African garb, military attire, people from surrounding countries, a king and queen, president and first lady...and I pan around to the most important people, and guess what? They look like me.”

Boyd is a 2009 Molloy graduate, a Cornell University graduate, a Youth Ambassador for Voices of African Mothers, and has been involved in UN-hosted conversations held at the Commission on the Status of Women Conference. She is the founder of Dezire2Inspire, an international initiative with the mission to empower women and girls everywhere.

Panelists discussed how being Black in work environments also includes uncomfortable exchanges. Nyahuma provided insight to address needed changes when working with diverse colleagues. “Sometimes you hear Whites will say ‘I don’t see color. I don’t care if you’re white, black, blue, purple, etc.’, and I say ‘No, I want you to see me as a Black man. I need you to see me and understand me in the skin I’m in, because I’m comfortable in that skin, and if you detach me from my Blackness, then you can’t see me.’”

Nyahuma is a parent of a current student at Molloy and an ordained elder within the Presbyterian Church. He has an MA in History from City College and has served twenty-six years as a Sergeant within the New York State Court System.

For Gold-Onwude, while being a female Black professional comes with its unique challenges, it also provides self-confidence. “I would say my journey of really stepping into myself as a woman, a Black woman, naturally comes with age and experience, finding myself...people have tried to suppress that. They want you to fit in, sound and look a certain way, not paying attention that you’re a woman in a male-dominated space, in a high-profile position.”

“I’ve decided fully at this point in my life and career, I won’t hide who I am, and I feel like the best success I’ve had has been when I’ve leaned in on my identity, because who I am is what’s separating me,” said Gold-Onwude.

Gold-Onwude is a 2005 Molloy alumna and Stanford University graduate, where she earned her BA and MA and played on the women’s basketball team. She is a Sports Broadcaster whose career spanned including hosting ESPN’s First Take, Basketball analyzing across ESPN, NBA on TNT, Pac-12 Networks, NBA TV, MSG Networks, NBC Sports, and the 2016 Rio Olympics on NBC.

Molloy’s inaugural Black Excellence Townhall was a new kind of conversation and an important milestone for the school. “This forum provided an important educational opportunity for students, faculty, and our broader community,” said Principal Dr. Darius Penikas. “Molloy looks forward to offering these types of opportunities in the future.”

The Black Excellence Townhall was the first of many events that the Council for Diversity & Inclusion is excited to organize for the benefit of the Molloy community.