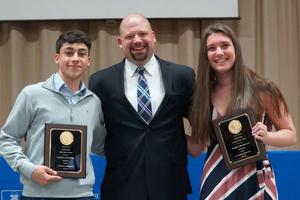 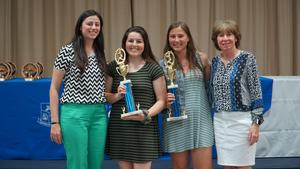 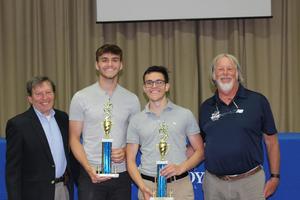 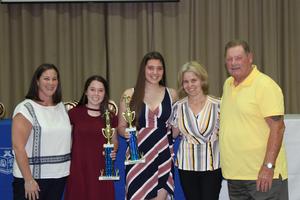 On May 21, 2019, Molloy presented awards to its top student-athletes in each sport, as well as the top male and female overall during its Athletic Awards Night ceremony. James Loeffel ‘19 and Bridget Montgomery ‘19 were named the Jack Curran Outstanding Senior Athletes. In addition, outstanding student-athletes who excelled in both the classroom and in athletic competition received Student-Athletic Academic Awards.

James Loeffel is a 4 year Varsity athlete. He was captain as a senior and is a four-time State Qualifier. He is an 8-time Brooklyn/Queens Champion. He was a 2-time podium finisher at City Meets. He is a 4-time Meet winner. Through his leadership, motivation, and work ethic he led Molloy to the CHSAA Intersectional State Championship in Cross Country. Molloy has only done this one time before in 1981. He will be attending Seton Hall University on a Track scholarship in the fall.

Bridget Montgomery is a four-year Varsity athlete. She was the captain of her team and broke 10 records including lowering her own record 5 times. As a freshman, she went undefeated in all of her events. In the City Championships she won both of her events, set new school records, and won the City Championship in two relays. As a sophomore, Bridget broke another school record as well lowered her own record in the 500 Free Style. As a junior, she lowered her own record yet again in the 200 and 500 Free Style, and she did that once again as a senior. Bridget will be attending Stonybrook University on a swimming scholarship in the fall.

Congratulations to all of our winners and their coaches:

Congratulations to our Student Academic Award winners. This honor is presented to outstanding student-athletes who excelled in both the classroom and in athletic competition. Winners: