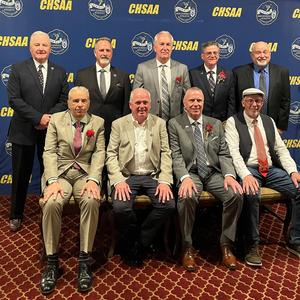 Molloy’s Athletics Department is full of dedicated athletes and coaches alike. One of these coaches, Mr. Frank Gambino ‘74, was recently inducted into the Catholic High School Athletic Association Hall of Fame!

Mr. Gambino ran track for all four of his years as a student at Molloy, 1970-1974. In 1981, he returned to his alma mater as a teacher, and three years later began coaching track and field. Over the course of 37 years, his teams have won 77 Brooklyn/Queens Championships and 13 City Championships. Mr. Gambino retired from coaching in 2021. “It was both inspiring and humbling to coach at Molloy,” said Mr. Gambino during his induction speech, continuing, “The track program was quite a program to become a part of, and with an ensemble of coaches…we worked to honor that tradition.”

The induction ceremony was a night of nostalgia and reminiscence as Mr Gambino and his fellow coaches reflected on his many years of success. Mr. Gambino thanked the Molloy community, the CHSAA, and his family and friends for their support and encouragement. Congratulations to Mr. Gambino and all of this year’s honorees!