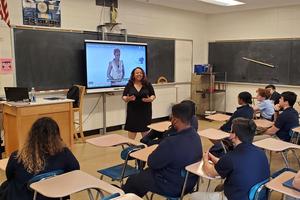 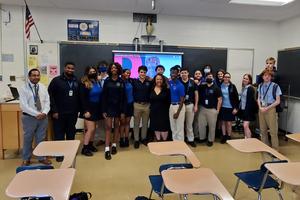 Dr. Prince and Dr. Mangar collaborate to teach Stanners about language and bias

In April, Dr. Alice Prince attended Dr. Jonathan Mangar’s ‘09 Senior Linguistics Class to host a presentation. Dr. Prince, who serves as a Diversity and Inclusion Consultant for Molloy, collaborated with the World Language Department to highlight the way language relates to how people treat each other. Dr. Prince used the class period to discuss “The Single Story,” a term used by author Chimamanda Ngozi Adichie to explain the effects of judgment and bias, and relate it to sociolinguistics.


The linguistics course, entitled “Language, the World, and Us,” teaches Stanners about the different aspects that make up a language. Additionally, Dr. Mangar explains how language is affected by culture, society, and thought, and examines dialect and accents. Kwame Opam ‘22 stated that the class is where he learned “to understand the origins of language,” and how “[humans] subconsciously make things such as…voiced or voiceless noises,” and Dr. Mangar wanted to show the connection between language and bias.


Beginning the class discussion by getting to know the students, Dr. Prince introduced a few icebreakers, encouraging Stanners to be honest in their answers. Although seemingly unrelated at first, senior Autumn Hill ‘22 tells us, “I loved how [the ice breakers] were able to bring us to a real truth, that there is nothing more important than staying true to who you are.”


During the class, Dr. Prince played a TED Talk by author Chimamanda Ngozi Adichie to discuss the harm of relying on stereotypes and biases. In the video, Adichie spoke of the dangers of a “Single Story,” a single perception of something that is backed solely by hearsay and bias based around misconceived notions of larger groups of people. Dr. Prince reacted to the video stating, “If you don’t overcome your biases and you don’t get to know a whole person, you’re stunting your own development.” When asked about her takeaway from the video, Autumn responded, “The lesson was that we all have unconscious biases, but we must not act on them or judge a person based on one single story we think we know about them.” In regards to linguistics, it was discussed that people may judge someone instinctively based on their speech patterns.


“An understanding of linguistics can help you interact with people all over the world,” Dr. Prince told Stanners. A discussion ensued regarding understanding a culture through the evolution of words. For instance, understanding the origins of words and what they initially meant might stop someone from using them in inappropriate ways. Autumn “liked how [Dr. Prince] gave examples of how certain word meanings change over time,” because using a word incorrectly may be considered offensive. Dr. Mangar appreciated the informative discussion, stating, “Dr. Prince’s presentation helped us make connections between the way people speak and the way others think of them, and enabled the students to examine how they perceive others based on features of their language.” The class felt motivated to ask questions and participate throughout, with one Stanner confidently stating, “Don’t judge people right off the bat!” A big thank you to Dr. Prince for taking time to be directly in the classroom with students!