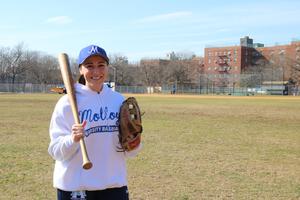 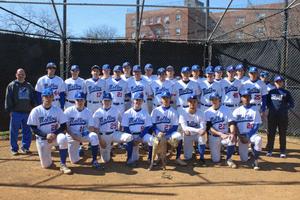 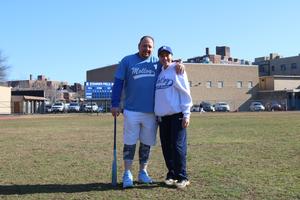 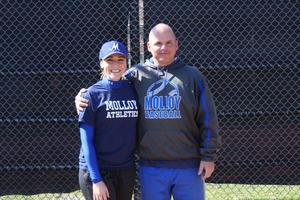 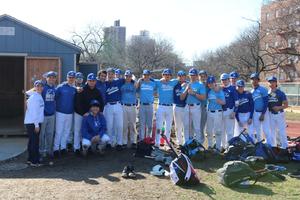 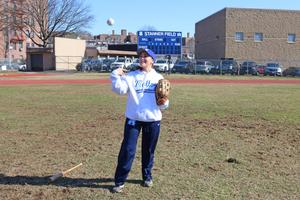 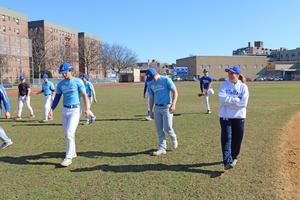 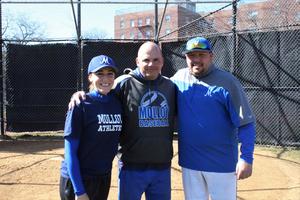 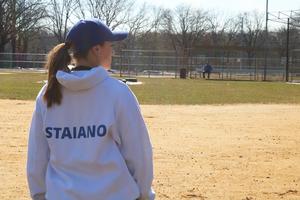 Congratulations, Ms. Staiano, on being the first female baseball coach at Molloy!

Archbishop Molloy High School is proud to formally introduce Stephanie Staiano, a Physical Education teacher and a dedicated Varsity Assistant Baseball Coach. The first ever female baseball coach at Molloy, Stephanie is setting the precedent for women to have no limitations in what they can pursue.


Originally from Long Island, Stephanie attended Kellenberg Memorial High School, participating in the athletics program as a multi-sport athlete throughout high school graduating as the 2013 Female Class Scholar Athlete. A three-time All-CHSAA selection for softball, Stephanie also won two CHSAA State Championships while at Kellenberg. Her collegiate athletic career began at Dowling College and continued on at Adelphi University. Stephanie dedicated her time to softball and played in the Women’s College World Series her Junior year, and won the Northeast 10 Championship her Senior year! On four separate occasions, she was on the NE10 Commissioner’s Honor Roll, and was awarded the D2 ADA Academic Achievement Award twice. Motivated and accomplished, her parents have supported her from the very beginning and instilled in her an outstanding work ethic; as stated by Stephanie herself, “You will not outwork me.”


A persistent athlete with a dream to coach, Stephanie received a Bachelor's Degree in Physical Education and a Master’s Degree in Health Education. She joined Molloy’s faculty in September 2021 and after finding out the baseball program was in need of an Assistant Coach, she made it her goal to get the job. When asked about her motivation, she said, “I’ve always wanted to coach baseball. In high school, I practiced with the baseball team in the winter, because softball practice didn’t start until the spring. I went to practice every week and I felt like part of the team. I was playing baseball with the guys and felt so comfortable. The coaches treated me like I was part of the team.”


Nevertheless, a love for sports is not the only reason Stephanie makes a great coach. Stephanie has years of coaching experience under her belt, working with both baseball and softball players. At Kellenberg, she was the Assistant Coach of the Varsity Tennis team, as well as the coach for the Summer Softball Camp. During her summers in college, she gave baseball and softball batting lessons at multiple batting cages on Long Island, and she coached baseball and softball fielding and hitting clinics as well. She also coached softball clinics and camps at Adelphi, and coached tennis at Future Stars Summer Camp! As a college player, she posted a .271 batting average in her senior campaign, and started all 57 games in the outfield.


However, even before these experiences, Stephanie was exposed to good coaches and team camaraderie, saying, “My dad played competitive softball and traveled around, so my entire childhood was at the ball field. I’ve always just been in it. In fact, I’ve been lucky enough to have had so many incredible coaches throughout my career.” Knowing this was what she wanted to do, Stephanie expressed her interest in coaching to Varsity Head Coach Mr. Christopher DeSarno, persistent in wanting to get her foot in the door. Tenacious, she stated, “As I was trying to work my way up to a coaching position, I asked my college coach for advice. He told me that nobody was going to just give me a shot, so I had to make my own shot. This lit a fire under me.”


This fire did not go unnoticed. After mentioning her intentions to her Molloy colleagues, Stephanie received overwhelming support and motivation. “A lot of really good people advocated for me to go for this, and it means the absolute world to me,” she said, also stating, “Our Principal, Dr. Penikas, and Athletic Director, Mr. McCleary, have supported my goal to coach baseball.” She recalls, “In February, Mr. DeSarno sat me down and said, ‘This is the schedule, these are the times. Think about it.’ I told him I didn’t have to think about it; I was in. Then, on our first day, he said, ‘Let’s pioneer this,’ and I’ve admired him since.” Stephanie is an Assistant Coach, but she is made to feel respected. “I appreciate DeSarno for giving me a shot,” she said, continuing, “He didn’t have to, but he took a chance on me, and now we have this really good relationship where I feel my opinion matters.”


Stephanie is now officially one of the Assistant Coaches of Molloy’s Varsity Baseball team, along with John Zucchi. Spring practices have begun, and the players are on board with Molloy’s new direction; especially with how Coach Staiano runs things. “The boys have been nothing but good to me. I’m just ‘Coach.’ I feel the respect. It might be a small thing to them, but they have no idea how much that means to me. I don’t feel different or uncomfortable; I feel accepted. They know I want them to do well, and that’s what matters. I care about these kids, and I look forward to going to practice every day.”


However, while being a great coach is her goal, Stephanie also had a much bigger picture in mind. She tells us, “As much as I am doing this to help the boys, and as much as I’m doing this to help better them as players and gentlemen, I’m ultimately doing this for the girls. I want them to know that they can. I want them to have the confidence to be whatever they want to be and do whatever they want to do. If they meet the right people along the way, they’ll help you get there.” So congratulations Stephanie Staiano: teacher, coach, and trailblazer.
Published March 29, 2022 Print