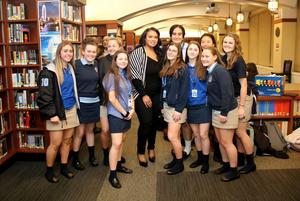 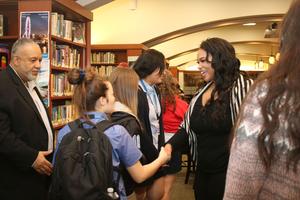 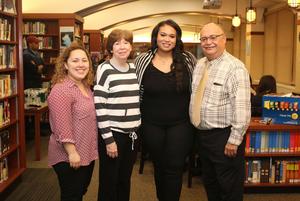 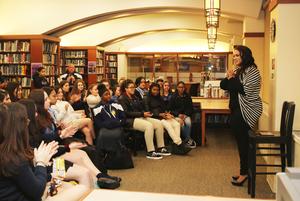 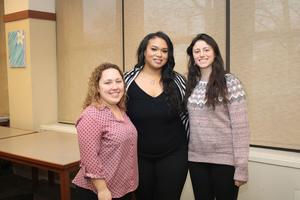 In February, Molloy welcomed former softball star turned global women’s advocate Janelle Boyd ’09 as a guest speaker. Janelle offered a riveting and enthusiastic presentation about how she started out as a talented teen lacking confidence and ultimately became a leader on the field of play and on the world stage. When Janelle started her Molloy softball career she did not always feel like she belonged. Over time, however, she began to realize the importance of believing in herself and that she was the best player on the field whenever she stepped across the foul line. She used the metaphor of a tea pot being repeatedly shaped, molded, and tempered under extreme heat time and time again until it reached its highest-quality form. Janelle was like that teapot, pushing herself and working hard everyday until she could be where she wanted to be. Janelle’s performance over her four years at Molloy earned her placement on the All-City Softball Team and the honor of NYC Player of the Year.
MORE ABOUT JANELLE: Janelle Boyd is a Cornell University grad and a Youth Ambassador for Voices of African Mothers, a non-profit organization recognized and supported by the United Nations. Janelle has addressed the UN body several times on the progression of women and girls globally. She has traveled to Africa on behalf of her organization as a public speaker. Janelle has, for the past 7 years, held the position of Staffing Manager for the world renowned multi-billion dollar international staffing firm Robert Half International Inc. When not partnering with various organizations to identify, recruit, select and hire top talents, she is joining arms with non-profit organizations to help communities through different charitable endeavors. Janelle is also the founder of Dezire2Inspire, an organization geared toward the empowerment of young women. D2i has partnered with several female empowerment organizations like Voices of African Mothers, Today’s Girl Tomorrow’s Woman, Church City Youth, Kingdom House Youth Ministries, Angelic Home of Hope and others. For the past 5 years, Janelle has been a part of the conversations held at the Commission on the Status of Women Conference, hosted by the UN.
Published April 8, 2020 Print