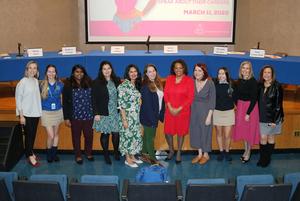 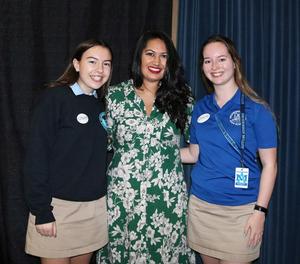 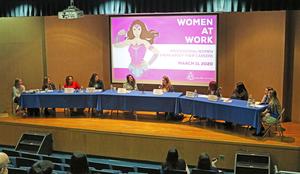 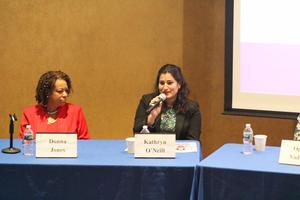 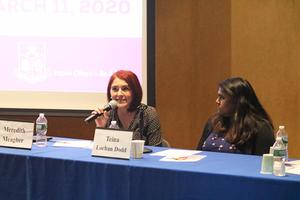 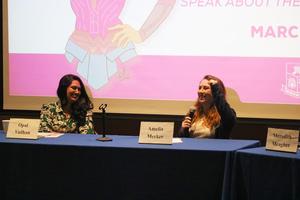 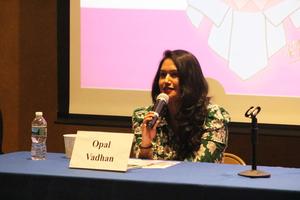 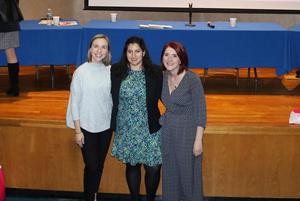 On March 11th, before the start of distance learning, Molloy’s GERLL Club (Girls Empowerment for Real Life Leadership) hosted a very special Women at Work panel event after school. The panel featured alumnae and friends of Molloy representing fields including healthcare, law, development/non-profit, education, visual arts/design, and communications. The discussion focused on the experiences of each panelist within their industry, while each shared unique insights and professional advice. 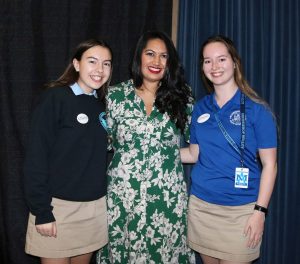 Moderator Ms. MaryAnn Safrey encouraged GERLL Club members to independently handle details of the event including recruiting the panelists. “I wanted to empower our students to contact the panelists, follow up on emails, and create questions. I mediated some, but our club leaders, Elizabeth Sullivan ’20 and Jaimie Arocho-Kelly ’20, were responsible, mature, and independent in their preparation.” Ms. Safrey also noted that the audience enjoyed the comfortable cross-conversation among the panelists. “The panel picked up on one another’s comments and elaborated on many issues relating to their careers and women in particular,” said Ms. Safrey. (Pictured right: Elizabeth Sullivan ’20, Opal Vadhan ’11, and Jaimie Arocho-Kelly ’20)

A brief Q&A session led to the conclusion of the event. Each panelist was later presented with a complimentary gift as a show of thanks. “It was another extraordinary panel with accomplished, inspiring women,” raved Ms. Safrey.

“I think the Women at Work panel is one of the most beneficial events Molloy has to offer,” said Jaimie. “It was so inspiring to hear these women share their stories and advice, and it was special that four of the six panelists graduated from Molloy. It’s such a great opportunity for students to build connections in the numerous professional fields that were represented, and the panelists were really great at offering these connections. Two of them even offered me internships if I was interested. Organizing and hosting the event was such an amazing opportunity for Lizzie Sullivan and I, and we hope other Stanners can continue to benefit from future panels.”

Ms. Teina Lochan Dodd is a Registered Nurse practicing in the ICU of a Level 1 Trauma Center in Massachusetts. She treats many kinds of patients including those suffering from severe physical traumas.

Ms. Donna Jones has worked in education for over 26 years. She is currently the Superintendent of Schools for the Patchogue Medford School District in Suffolk County. She manages and oversees the daily operations of the 7,500 student school district.

Ms. Meredith Meagher, PhD, ’04 is a Development Manager at the Coalition Against Trafficking in Women (CATW), an international non-profit organization based in NYC. She previously lived in Ireland for seven years where she worked at the Immigrant Council of Ireland and Ruhama, a frontline service organization in Dublin which works with women affected by human trafficking and gender-based violence.

Ms. Amelia Merker ’10 is a Project Coordinator for the Exhibits Experience team at the New York Hall of Science, where she helps coordinate new exhibit projects and refurbish exhibits. Previously, Ms. Merker was a Design Lab Resident, designing and developing activities and experiences around engineering and design concepts to educate visitors of all ages.

Ms. Kathryn O’Neill ’04  is an Assistant District Attorney in Queens County. She earned her J.D. from Boston University School of Law in 2011. Ms. O’Neill initially practiced civil litigation at a firm where she worked to obtain Medicaid benefits for residents of nursing homes and rehabilitation centers. She has since prosecuted crimes from domestic assaults to robberies and homicides. Her work extends to several other significant bureaus/units within Queens County.

Ms. Opal Vadhan ’11 is the Executive Assistant and Trip Director to Secretary Hillary Rodham Clinton. She previously worked on the National Advance Team for Hillary for America. A Pace University graduate, Ms. Vadhan was named to Pace’s “30 Under 30” list of influential young adults and is a two-time NY Women in Communications scholarship winner. Her past work experience also includes The White House, Sony Music Entertainment, NBC Nightly News, MSNBC, and The Rachael Ray Show. She has also been an avid volunteer with the Marist Young Adult program.

GERLL Club is seeking alumnae in a variety of industries to sit in on future Women at Work panels! If you are interested in serving as a panelist please contact alumni@molloyhs.org.