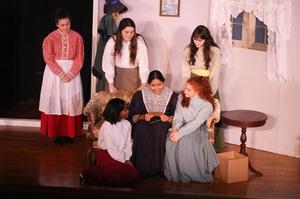 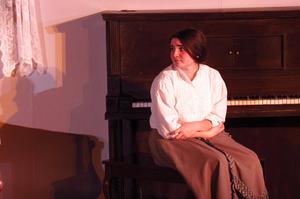 Photos courtesy of the Photography Club.

Congratulations to our talented Stanner Players and Director Ms. Shannon Winters ’06 for their successful production of the classic play Little Women. Ms. Winters noted that the selection of Little Women was in part inspired by recent events at Molloy. “One of the biggest struggles I have encountered in selecting a play each fall is finding one with more than a few female characters, let alone substantial female characters. Since “GERLL Power” is very much alive at Molloy following the creation of the Girl’s Empowerment for Real Life Leadership Club, the first annual Fashion Show, and a new scholarship fund for female students this past year, it seemed appropriate to find a way to keep the momentum going,” said Winters. Little Women tells the story of a mother and her four daughters, the March sisters, as they deal with the absence of their husband/father who has gone off to serve as a minister during the Civil War. “Women in the 1860s traditionally were not empowered compared to the way women are today, but the March women show that being opinionated, strong-willed, and ceaseless in their faith and love for each other is something to be celebrated,” said Winters. | Click here to read the playbill & read more about the cast & crew.

SAVE THE DATE: Our spring musical Curtains will run from April 2-5!