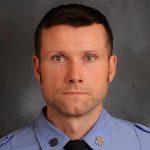 On October 30th, the late FDNY Lt. Michael Davidson ’99 was honored by local representatives and NYC Parks with the renaming of a new park at Phipps Playground in Sunnyside Gardens in Davidson’s honor. A large crowd made up of family, friends, FDNY colleagues, and members of the community gathered for the ceremony near 39th Avenue in Sunnyside. Davidson grew up across the street from the park, which will now forever bear the name of this beloved fallen hero. Davidson, a 15-year FDNY veteran, was tragically killed while fighting a fire in Harlem on March 23, 2018. Please click the following links for additional media coverage. | CBS Local | Sunnyside Post | QNS.com
Published November 26, 2019 Print