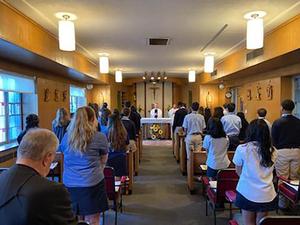 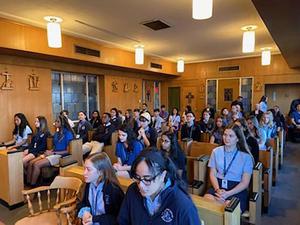 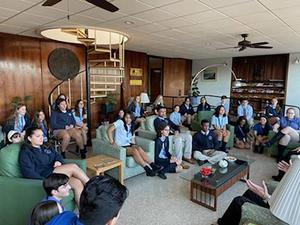 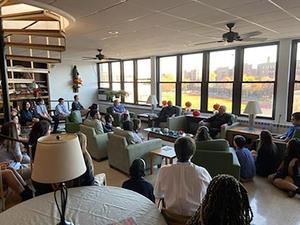 During the week of November 4th, Molloy hosted Marist Brothers Vocation Directors Br. Al Rivera (Provincial Office) and Br. Brian Poulin for Vocations Week. Molloy was the first stop on their tour of each Marist school in the United States. As Vocation Directors, Br. Al and Br. Brian accompany individuals who may be considering religious life. When visiting schools, Br. Al and Br. Brian know that many in such large audiences may not be called to religious life, and in turn they take an educational and informational approach focused on helping students think about choosing lives full of meaning.

Each day of Vocations Week featured a unique event. On Monday, Bishop Raymond Chappetto and Fr. Sean Suckiel, Vocation Director for the Diocese of Brooklyn, celebrated Mass with the Marist Brothers and a group of students in Molloy’s fourth floor community chapel (pictured right). On Tuesday, during a meeting of the Lantern Club, the students’ prayer centered on the theme of vocations. On Wednesday, a group of students was again invited up to Molloy’s fourth floor community for a discussion with the Marist Brothers as well as a tour of some of the facilities. On Thursday, students were invited to a panel discussion with several people in religious life and lay people to hear different perspectives. Finally, on Friday, Br. Brian joined Molloy juniors on their retreat to Esopus as a way to extend the presence of Vocations Week. In addition, throughout the week, Br. Al and Br. Brian were invited to classrooms and were featured on daily morning announcements to answer questions about the Marist ministry and what it’s like to live out a religious vocation.

“Our message to all of our students is to find the life that you’re meant for,” said Br. Brian. “It’s not necessarily what other people have told you to do. Listen for how God is speaking in your own heart. Part of that is who you are as a person and the experiences you’ve had, but how can you meet the needs of the world or make a difference with your personal gifts? Everyone can make a significant difference if they align with their true purpose.”

Pictured below: Mass and Q&A with Marist Brothers in Molloy’s fourth floor community; posters celebrating Marist Pillars which were hung in the hallways around Molloy during Vocations Week. Photos courtesy of Mike Germano ’93, Director of Campus Ministry.