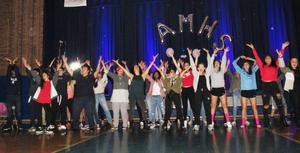 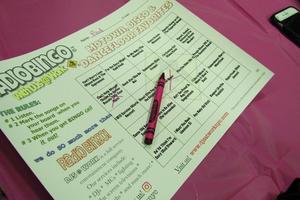 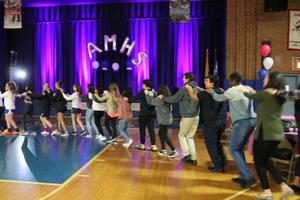 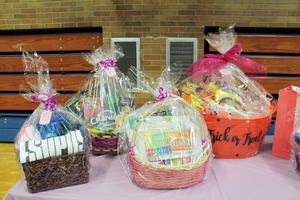 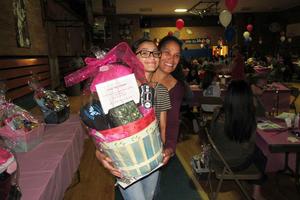 Earlier this month, Molloy hosted its first ever Radio Bingo event, with proceeds benefiting the recently established Girls Leadership Scholarships Fund. Over 200 students, teachers, alumni, family members and friends across generations attended the event. The Marist Brothers and members of Molloy’s School Board also had a presence at the event.

What is Radio Bingo? It’s Name That Tune meets Bingo, of course! Musical-themed Bingo rounds, hosted by DJs@Work highlighted 80s and 90s music, and TV and movie themes, while players were tasked with identifying the song clips and scoring their Bingo cards accordingly. The evening also included a raffle drawing and prize baskets, a 50/50 raffle, and plenty of singing and dancing. “It was a great event for young and old,” said Ms. MaryAnn Safrey, a member of the Girls Leadership Scholarships Fund Committee. “The best part was watching all of the interactions at the tables during the game and later on the dance floor.”

In all, Radio Bingo raised over $10,000 for the Girls Leadership Scholarships Fund. This comes off the success of Molloy’s first Fashion Show in March of this year, which raised over $23,000 for the fund. “The committee hopes these scholarships will help continue to attract exceptionally motivated and talented girls to Molloy,” said Ms. Safrey. The committee said it plans to sell t-shirts and water mottles from Radio Bingo, marked with the motto “Inspire Others – Be A Leader” throughout the year, while more events are also being considered to help the fund grow even stronger.

We extend our sincerest thanks to everyone who supported the Radio Bingo and the Girls Leadership Scholarships Fund, or who volunteered their time and efforts in making the event a great success. We extend our thanks to the following:

Thank you to alumni Tim Sullivan ’00, John McGuinness ‘87, and Eric Drobinko ‘95, and to School Board members Rob Donohue, Steve Langowski, and Theresa Foy. Thank you as well to our emcee Tim Henning ‘98 of DJs @ Work. Thank you to “Nick the Balloonatic” of Howard Beach for donating all of the colorful and creative balloons. Thank you to Nick Bamonte of 69th Street Distributors of Maspeth for donating beverages. Thank you to Sean O’Sullivan ’02 and John Cregan of Woodhaven House and Maspeth Discount Wine & Liquors. Thank you to the generous attendees who chose to donate back their winnings, and to the anonymous donor who matched a last minute “flash” collection at $500.